Know The Ledge: A 20 Year Retrospective On "Juice" 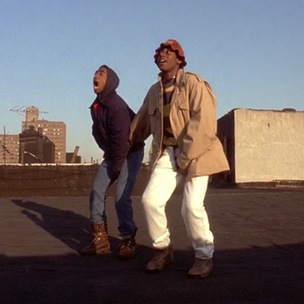 Every decade or so, a film comes along that defines a generation. It paints a vivid picture, exposes social ills and captures the fabric of a culture. For my aunt it was Cooley High, and for my older sister it was Krush Groove. For me—a Hip Hop loving ‘80s baby from New York City—it was Juice. It’s a rare thing when Hollywood chronicles the rise of boys to men in Black America. But when it’s done correctly, the effects are long lasting and significant.

Raking in over $20 million in U.S. box office sales, the revered film was also a springboard that launched successful acting careers for the four budding stars. Omar Epps, currently co-starring on Fox’s “House,” went on to star in box office hits like Higher Learning and Love & Basketball. Meanwhile Khalil Kain, most recently spotted in Tyler Perry’s For Colored Girls, landed major roles in films like Love Jones, Renaissance Man and television sitcoms like “Girlfriends.” Jermaine Hopkins, who was recently arrested for drug possession and intent to sell, starred in Def Jam’s How to Be a Player, Phat Beach and appeared in several TV shows like “Moesha” and “The Parent ‘Hood.” And 2Pac, besides becoming one of the most profound figures in Hip Hop, was on the brink of a very successful acting career, starring in films like Poetic Justice and Above the Rim.

For me, Juice was indeed a very special film with a very special cast. Though funny and light hearted at times, the flick was also acutely tragic. Smushed in between Steel’s beat boxing in the mirror and Q’s smooth talking (in the record store), there were serious themes. After watching the movie some 400 odd times over the past 20 years (no, I’m serious), here are the top five themes that resonate with me.

“I wanna pick up some party tapes from the Record Rack for my audition tape. That’s aiight with you, Raheem?” -Q

I’d argue that Hip Hop was the fifth character in the film; it was everywhere. I mean, the movie opened to Eric B & Rakim’s “Know the Ledge.” Does it get more Hip Hop than that? Not unless it’s the soundtrack, of course. The gold-selling project, produced by music pioneer Hank Shocklee, was just as profound as the cult classic. Songs from artists like Big Daddy Kane and Cypress Hill moved the movie along and defined scenes. And actual Hip Hop figures flooded the cast too, including Queen Latifah, Treach, DJ Jazzy Joyce, “Yo! MTV Raps” hosts Fab 5 Freddy and Doctor Dre, Special Ed, EPMD and DJ Red Alert.

Dickerson perhaps showcased the genre’s relevance best with Q’s character. Through the “local” DJ, he illustrated the influence of Hip Hop and how the art was (and still is) a refuge for many black men. As the strongest and most sensible character, Q had the best chance for a bright future. And it was because his hope was rooted in Hip Hop. It was no longer just, “Either you slangin’ crack-rock or you got a wicked jump shot.” Hip Hop could get you out of the hood too.

The very storyline of Juice mirrored the landscape in the early ‘90s. New York was the epicenter of Hip Hop during the “Golden Era.” The music was fun and naïve, but most (like Q) could sense that trouble (Bishop) was ahead for the genre.

It’s A Jungle Out There

The early ‘90s saw the height of the crack cocaine epidemic. New York City streets were riddled with gangs, violence, shootings and robberies. There was, as the M-O-B-B poignantly stated, “A war going outside, no man is safe from.” Juice echoed this climate with the constant beef between the boys and gang leader Radames, local bodega owner Quiles and ultimately Raheem’s own death at the hands of his friend, Bishop. Violence was rampant. The murder rate in New York City peaked in 1990, and was at one of its highest rates with almost 2,400 homicides in 1992 when Juice was released. Young black men were dying on the streets at unprecedented rates. Friends and families were left with only tears, unanswered questions and cold cases.

But things have improved, drastically. New York’s murder rate is down 60% according to figures from The Disaster Center, and robberies are down over 70%. Some experts speculate that the declines are a result of the crumpled crack cocaine craze, stricter gun control laws and stiffer prison sentences. “Too bad Raheem had to die first, huh.”

Insane In The Membrane

“You right, I am crazy. But you know what else? I don’t give a fuck.” -Bishop

Bishop was indeed driven by power, or juice as the movie so aptly describes. But he was probably driven by a lack of serotonin in his brain as well. Lots of men want respect, but few go around taking down their own crew. Even New Jack City drug kingpin Nino Brown needed his support system, only killing G-Money because he started on that crack pipe. It seems like Bishop’s killing spree and obsession with power was the onset of a mental disorder.

We saw early on that Bishop’s father struggled with “something” as he sat comatose watching cartoons. And Radames even made mention of him. Sadly, mental illness in the black community is often ignored and swept under the rug or into the back room. According to the Black Mental Health Alliance, less than half of African American adults with mental disorders seek treatment for such health problems, and less than one third of their children receive treatment.

It has long been known that mental illness in the black community is stigmatized. The National Alliance on Mental Illness says that African Americans tend to rely on family, religious and social communities for emotional support, rather than turning to health care. Not turning to the professionals, unfortunately, can sometimes turn a young black man into Roland Bishop.

“You gotta be ready to throw down, stand up and die for that shit like Blizzard did. If you want some Juice.” -Bishop

No doubt, to me the most obvious theme in the film was the concept of fear versus respect. Most of us desire to be respected, but few know how to achieve it without imposing fear. And respect is very different from fear. Each character in the film struggled with the concept of respect; Q in his music, Bishop in the streets and Steel in his crew. The only character that seemed well respected in various circles was Raheem. Unfortunately, it was this very respect and Bishop’s covetousness of it that led to his demise.

“I was doing the hoochie-coochie, my friend.” -Steel

Let’s not forget the fun stuff-the jokes, smiles and laughs, which allow for such an affinity toward the film even today. The four friends had their fair share of fun skipping school, cracking jokes, running from cops (we all have different ideas of fun) and pursuing teenage love affairs. Was I the only one puzzled by Q’s romantic relationship with the twenty-something Yolanda? All in all, great memories were made. And just like many of our high school years, Juice was a clever mix of laughs, tears and lessons all served up with a side of Hip Hop.

Lakeia Brown is a freelance writer living in New York. Her work has appeared in publications and websites like Essence, The Atlanta-Journal Constitution, New York Newsday and Theroot.com.