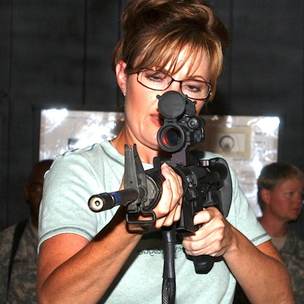 I Pledge Allegiance: The Value Of Hip Hop's Dissenting Opinions

Like many other Hip Hop fans, I generally could care less about the Fourth of July. I’m a black man from where politically correct people like to refer to as the “inner city.” So at some point you get pulled over for the infamous busted tail light, or “fitting the description,” or have enough old ladies who make less money than you clutching their purses while sharing elevators, that your patriotism wanes. And this isn’t a particularly black or even a minority feeling. As our country becomes more and more saturated with Tea Partying and an overall sense of racial and cultural intolerance, it’s easier to notice fans and emcees of all races that are equally frustrated with the state of things.

As conservatives prepare for the upcoming 2012 elections, their handlers often single out Hip Hop artists as easy targets. In May, Sarah Palin and Tucker Carlson unsuccessfully tried to label Common as “vile” and “controversial”—this despite the fact that we’ve seen Palin handle firearms on television way more often than Common, who doubles as an actor. And Lupe Fiasco, who I and other HipHopDX writers have justifiably both commended and condemned on this site, recently became a target when he called President Obama a “terrorist.” In such cases, it’s easy to draw a line in the sand, and turn on some vintage Public Enemy or Ice Cube and continue using the Fourth of July as a convenient excuse to cop a fifth of some potent liquor and enjoy having a few days off to pull out the grill. The media often likes to paint in broad strokes, and over the past few decades, they’re made it clear they prefer profiting off of vilifying Hip Hop culture. But in a rare about-face, I would offer an alternative this year and argue that the dissenting opinions of Lupe, Brother Ali and R.A. (or Public Enemy and Cube if you want to keep it vintage) are the ultimate form of patriotism.

“There are a number of people who still live in this bubble of white privilege with this sense of entitlement,” Brother Ali offered, when I asked if there was any connection to the state of the country and his Us album. This was a little over a year ago, prior to the killing of Osama Bin Laden, when the majority of Hip Hop’s Obama-inspired activism had suddenly disappeared.

Granted, these weren’t necessarily groundbreaking quotes, but I always felt dissention took many forms. And while I was expecting a brief answer, since I viewed Ali as more of a Martin than a Malcolm type, he was happy to sound off on the topic for a good 15 minutes. Maybe that was my mistake by forgetting about tracks like “Uncle Sam Goddamn.”

Either way, he provided a much-needed dissenting voice in Hip Hop. It’s something we need more of—be they white, black or any other shade—and those voices can arguably be more patriotic than any red, white and blue propaganda Rap. And I’m not talking about that John Cena bullshit, because there are actually a few documented cases of respectable emcees tipping their fitted to Uncle Sam.

As far as I can tell, there were two specific periods during the last decade, when you were likely to hear anything close to overt patriotism in Hip Hop. During the time immediately after the September 11 attacks, we got a healthy dose of anti-terrorist anger disguised as patriotism, and no one was immune. When Wu-Tang Clan dropped their Iron Flag  album in 2001, Ghostface Killah could be heard rhyming the following on “Rules:”

“Who the fuck knocked our buildings down / Who the man behind the World Trade massacre step up now / Where them four planes at / Is you insane bitch / Fly that shit over my hood and get blown to bits / No disrespect that’s where I rest my head / I understand you gotta rest yours too nigga / My peoples dead / America together we stand divided we fall / Mr. Bush sit down / I’m in charge of the war…”

Between a half-dozen Hip Hop magazines and about twice as many more mainstream outlets like the New York Times, Iron Flag was rated pretty favorably. The album moved 500,000 copies, so the Clan could take advantage of a sizeable audience. Yet among the litany of memorable Ghost verses, you rarely here anyone shouting out the time Ghostface respectfully asked Dubya to move aside so he could handle the War on Terror. None of that is to knock Ghost’s sentiment. Few people could predict the country spending 10 years and billions of dollars in the Middle East on a war that even Tony Starks eventually probably wanted no part of. And the sense of false patriotism the September 11 attacks brought on wasn’t just limited to New York rappers. Pastor Troy could also be found simultaneously waving his rifle and his Bible on “Bless America,” a track so over the top many of us thought it was a parody. In hindsight, “Bless America” almost sounds like a precursor to the Tea Partiers and Birthers.

The other, more recent period of overt patriotism came during the months before and after Barack Obama became the first non-white person to become President of the United States. Jay-Z, will.i.am, Bun B, ?uestlove and dozens of other Hip Hop notables endorsed Obama, with some customizing their songs to show support. You can’t quantifiably measure how memorable those songs were. I would argue they weren’t memorable at all, but that’s just my opinion. With the exception of Young Jeezy’s “My President,”

few of the Obama anthems actually reached the charts.

So why is it that people seem to remember “I Wanna Kill Sam,”

“Fight The Power” or even Trick Daddy’s “America” more than the few moments when Hip Hop extended the olive branch to America? I personally think we needed the dissention more. And given our current level of media desensitization, it takes something as brazen as Jedi Mind Tricks’ “Uncommon Valor” to shake us out of the everyday haze of our news networks only updating us on who is smashing which Kardashian sister. Again, this is just my opinion, and you may disagree. But I would be fairly surprised if years from now, people go back and look at songs like “My President,” “Rules” or “Yes We Can” as high water marks in Hip Hop music or culture.

The Value Of Fighting The Power

The dissenting opinions are invaluable not only to Hip Hop, but to America. Even if Lupe wants to square off with Bill O’Reilly and mistake imperialism for terrorism, something valuable is gained. And as much as people rightfully like to tote out dead prez and Immortal Technique during these arguments, it’s even more valuable hearing it from a mainstream artist like Lupe, even if a portion of us think he’s misguided. At this point in their careers, dead prez and Immortal Technique have very little commercial, crossover appeal. But there was a time earlier this year, when Lupe had the number one album in the country. It’s not hard to imagine the teenage daughter of some Tea Partier being lured in by the God awful “Outta My Head,” only to later be shocked by “Words I Never Said,”

I would make the argument that questioning what your government is doing is one of the most patriotic things a person can do—whether they’re a fan of Hip Hop or any other genre. After all, by and large the nation’s courts support such actions. It happened in 1992, when the 11th Circuit Court of Appeals in Atlanta overturned a ruling that attempted to ban the sale of 2 Live Crew’s album on the grounds of obscenity. And in a broader sense, the Supreme Court’s landmark decision in the 1964 case of New York Times v. Sullivan encourages such debate. It’s part of a legal precedent that allows for “uninhibited, robust, and wide-open” debate among people—rappers included. So as the Fourth of July approaches, I encourage anyone else who enjoys Hip Hop music and culture to not feel any less American by loudly playing music that questions the status quo. It’s your Constitutional right to criticize public officials or even stick your foot in your mouth—or in Lupe’s case—do both on television.