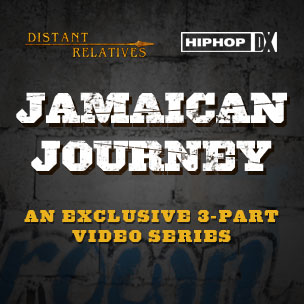 Welcome to Jamrock was just starting to blow in JA. I ended up flying to Jamaica with Eric Coleman to do the album cover of Jamrock from Brasil. Ras Kassa was our producer on the ground for that shoot. He is a wealth of knowledge on locations and the people and culture. So when I got the call to go down to JA again this November to shoot behind the scenes for the “Land of Promise” video that Kassa was directing I leapt at the chance.

I had been in some of the legendary sessions that became the Distant Relatives album at the Henson Studios in L.A. – even managed to get my jacket taken by Oliver Stone in the process (but that’s another story). The album itself is in so many ways historic and to be able to watch the music unfold was a true pleasure.

In the summer I was lucky enough to be invited on the road to document the UK and Ireland part of the European tour. Again it was an amazing experience. Damian’s birthday party thrown in London by Nas has to be one of the all time craziest fun times of my life, not to speak of the after-hours session in Dublin in a Kenyan bar.

But this trip to Jamaica was really a special end to 2010 for me. Basically it was a Tuesday to Saturday morning run. Nas had gotten there on Monday and we flew in from Miami with Damian and Stephen – fresh from studio sessions that provided the soundtrack for the trip on Tuesday evening.

That first night at Hope Road set the tenor of the rest of the trip. Nas was as relaxed as I’ve ever seen him, Damian was very at home and the surroundings at Bobs House – now the Marley Museum (see this clip to see Bob on those same steps being interviewed by a over-zealous racist Australian) were filled with history, characters and spirit.

Basically these three short films are my diary of that week. It was all shot on a Canon 5D with a Nikon 85 1.4. I broke out a few other lenses on the Friday – the video day but pretty much everything else is the 85 1.4.  I’m delighted with this work and I’m sold on the 5D.”

“Hope Road is the first film and is the story of that first night. I remember before I even had a chance to set the camera up right Nas was like “Yo, yo film this… “ and launched into the whole speech he gives here about “Smokin’ Cubans on the steps of Bob Marley…” from there on I knew I had to keep the camera up and ready to go. Please wait for the little surprise after the credits… Dawn on Hope Road.”

“Dubplates at Tuff Gong, is Part Two. On the third night Damian and Stephen Marley went to work over a new Stephen song called ‘Jah Army.’ The song is pure heat. Dubplates are the stock and trade of the Jamaican musician. Tuff Gong itself is a place filled with so much history as Stephen explains to Nas at the beginning – even Bunny Wailer made an surprise appearance.”

“Trenchtown Rock is the day of the video shoot. Kassa and his crew were in full effect by the time I got there. To shoot with Nas in Trenchtown is a special thing. We got a tour of the house where Bob learned to play guitar, the kitchen where Ziggy was conceived – barely as big as a closet.  And then there was the faces and people, such a strong spirit. It is really no shock in the end that so many incredible musicians came from Trenchtown.”