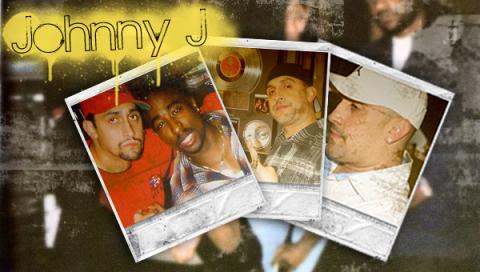 I was leaving Allen Iverson’s return to the Philadelphia 76ers game. Reaching Interstate 95 to head home, I flipped off talk radio, tired of hearing fans complain about Elton Brand being overpaid and Samuel Dalembert, well, being Samuel Dalembert. Signal blinking, I put my Sansa Fuze MP3 player on shuffle and inched along, waiting for my chance to exit bumper-to-bumper traffic. The first song that came on was 2Pac’s 1996 album cut, “Life Goes On.” It’s an old favorite, which undoubtedly makes me reminisce on the time Jse died, and the tragedy that took Tone’s life. This particular listen was different though. For a change it wasn’t about lost friends, family members or even the tragedy of losing Tupac Amaru Shakur, which are the emotions the song usually evokes. The song brought forth a new emotion that has slowly evolved into these words; It was finally time to deal with tragic passing of the song’s producer, Johnny J.

Johnny Lee Jackson passed away on October 3, 2008. I can distinctly remember working my full-time job, where I’m required to be in the office for one hour every day. The news I gathered on this morning stopped me in my tracks. I looked around the office, feeling the need to share the news. Johnny J, one of my favorite producers, the producer of some of 2Pac’s most listened-to tracks, took his life.

It was the first time I heard his name in years regrettably. I was loosely familiar with his Klockwork Entertainment label, but I can’t in good faith say that I was up-to-date with his artists or projects. A&Rs and label artists weren’t buzzing trying to get a beat from ‘Pac’s in-house producer, and Johnny J seemingly stayed loyal to those who were loyal to him, which is evident from his relationships with Napoleon and Big Syke. Maybe it was the reason he stayed in the shadows; maybe it’s the reason that when I finally shared the news with a colleague they referred to him nonchalantly as “the R&B guy at Death Row,” a clear and mistaken allusion to Danny Boy. It was hard to fathom that the man who produced the many soundtracks of my teenage years, who produced records that have sold over 60 million, has been mistaken for a guy who hasn’t sold a single one.

In 1995, “Death Around The Corner” was released on Me Against the World. It was a seminal release in my life, and came just at a time where I was becoming infatuated with Rap lyrics and content, as Hip Hop penetrated my everything. 2Pac’s lyrics were like proverbs, and they were scribbled throughout notebooks and on book covers. Johnny J was the conductor who orchestrated every movement, engineering each vocal, all the while silent- content to play behind the scenes, -under-appreciated – I could relate.

About this time, I was dealing with the normal teenage anxieties. Acne, rejection, and throw in being one of only five minorities in a white school, I was as angrily introverted as any teenager could possibly be. Hip Hop was my love, my voice, hitting up the record store was the best date a kid like me could possibly have. I spent all class writing 16’s, spent each night perfecting a flow that was non-existent to begin with. I could mimic my favorite cadences in Rap, the most meaningful lyric for any given mood, my favorite metaphor or punchline. As many may relate, this is what I lived for. In many ways, I lived through these artists, KRS-One’s “Ah Yeah” was the rebellious dialogue I chose to follow, and Tupac was the voice that I tried to emulate. I wanted the emotions that I was dealing with to be as powerful as the ones he portrayed. Then, there was the music behind the words. The basslines and musical composition that always seemed tailor-made for ‘Pac. Still from a time of tailor-made studio sessions, the beats never made your jaw drop, but they always made your head nod. Johnny J did that, he had that vibe.

So when a few months ago I heard an old Sway interview in passing about Tupac, I stopped. The Oakland icon veejay was telling a story about Tupac on the set of “California Love,” and Johnny was present. Sway (a man who along with King Tech introduced me to some of the nicest emcees alive) could not remember Johnny J’s name for the life of him. We’re talking about the man who produced, “Pour Out A Little Liquor,” “Unconditional Love,” “Death Around the Corner” and so many other classic Tupac records. This is the man whose bass lines and drums brought the best out in ‘Pac, while fans vibed to these records unknowingly how dope the production was. Johnny J gave Tupac the production that inspired some of the iconic rapper’s deepest thoughts, most sincere verses, and brilliant songwriting. Lyrics like “My dreams are censored, my hopes are pawned / I’m like a fiend that finally he sees when all the dope is gone” came with Johnny J behind the boards. ‘Pac almost certainly wrote that listening to a Johnny J beat, with his producer right beside him. Sway couldn’t remember his name.

Maybe names are meant to be forgotten. Maybe if they don’t inspire or insult a specific person, names disappear. Being an outsider, or a first, doesn’t ensure remembrance, often it brings forth exclusion. From its inception Hip Hop was a black culture, and suburban logic told the majority of kids that if you weren’t black you didn’t belong in hip hop. Vanilla Ice was a punchline and the casual fan couldn’t name a single white artist outside of their fallen hero. After the word “nigger” stopped getting a rise out of me, peers adapted, and being light skinned, “Mexican” was the next name they used. (The Mexican comment was always followed by a terrible racist joke) “Mexican’s don’t do Rap” they’d say sarcastically when they saw me writing a lyric on a book cover. They called Johnny J “the Mexican Master,” “Mariachi Man,” “The Jumping Bean,” as if he wasn’t suppose to belong.

Johnny Lee Jackson was born in Mexico, and raised in South Central LA. Starting around the same time Kid Frost released “La Raza,” he produced a rumored 150 tracks for one of or generation’s greatest talents, an emcee who was raised by a Black Panther no less. He didn’t need to try and fit in. He didn’t need to refute the labels, and he just made music and broke barriers in the process. Back in Central Pennsylvania, they would label my emcee dreams as “Mexican,” and I learned to respond calmly with one name, “Johnny J.” A confused look and silence almost always followed.

Maybe this is over a year late. Honestly, I’m ashamed this wasn’t written the day after I heard of Johnny’s tragic passing. I wish I would have broke down just how dope of a beat “Picture Me Rollin” is and why the beat to “How Do You Want It” brought the Thug Life front-man to new markets. I should have written about ‘Pac’s loyalty to the artists who gave him an opportunity in the game. I needed to write how he was a pioneering Mexican in Hip Hop. I should have detailed his humble beginning and told the world that he had a platinum record when he was still in high school. I should have wrote something to honor the man who sonically narrated a portion of my life, a man who produced behind the scenes, who defied Hip Hop’s stereotypes only to eventually define a period in the culture.

How many producers could keep up with Tupac’s frantic work ethic? We’ve all heard how quickly All Eyez On Me was created. Johnny was with him throughout the two-week process, recording multiple album-ready tracks in single a night. We envisioned a Dr. Dre-produced album when Tupac signed to Death Row, and sure, we got two classics, but can anybody complain about the rest of the album? Johnny J provided the canvas for Rap’s Jean-Michel Basquiat. The sonic texture Johnny J provided always seemed to be the appropriate texture and quality and the work that ‘Pac put on the canvas was more times than not incredible.

“Life Goes On,” just as 2Pac declared. New artists have entered the Hip Hop world after Tupac left us, and there are thousands of new producers since Johnny J passed. Life goes on. Music, however, has the possibility of timelessness. Music is the legacy we leave and the record “Life Goes On” is part of Johnny J’s legacy. The record itself doesn’t capture Tupac at his most lyrical; in fact, it may be one of the least lyrical records on All Eyez On Me. It does capture ‘Pac at maybe his most vulnerable; it captures a part of the man who was secure with his art, his voice, and his producer to release this track. When Miles Davis decided to step back from the Be-Bop and Hard Bop scene and strip down those intense trumpet solo’s, it had as much to do with his confidence in Bill Evans piano as it did with his new vision. “Life Goes On” resonates because of Johnny J’s production, the female vocals that he had in his vision, the drums, chords- everything. It allows Tupac to be honest, to be free of the lyrical constraints that emcees are often held to, and to create a classic record.

Johnny J’s passing is the epitome of a tragedy. The man was 39; he had a wife and two kids. We’ll never really know what happened on October 3, 2008 and maybe that’s a good thing. We are, however, left with an immense catalogue, far beyond the 39 years he lived on this planet. He was Tupac’s friend, collaborator, producer and dare I say equal. Yes, this is a year and some change late but Rest in Peace Johnny Lee Jackson. Your music made my life make sense when nothing else did.