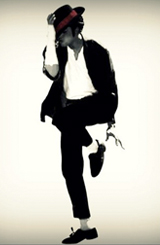 The Thrill Lives On: An Unpopular Perspective on The King of Pop

…At a Greensboro Grasshoppers game.

Like millions of folks worldwide, I’ll never forget where I was when I heard the news: Michael Jackson is dead.  Following is an unpopular take on arguably the most popular entertainer in the history of entertainment.

Born in 1958, Michael Jackson was a household name by the age of 10.  As the only one of the Jackson 5 to “make it” Michael was thrust into a very adult world of show biz as a pre-adolescent.  By the age of 20, he had a breakout solo album, Off the Wall, executive-produced by recording guru Quincy Jones.

By itself the above is fascinating; a little black boy from Indiana rises to the pinnacle of music during the volatile American 1960s. Motown Records’ most successful artist of all time was more than a success story- Michael Jackson was sheer cultural iconography.

Like another famous M.J., Jackson’s persona fascinated America because of its permanent yet impossible posture as race neutral. That is, Michael Jackson was black only in the visual sense, and then only on a fleeting basis.  As a boy he entertained millions worldwide with Berry Gordy’s happily safe lyrics which broached topics ranging from friendship to love to partying but, with rare exceptions, never racial commentary.  In true Motown fashion, Jackson’s musical image was one carefully crafted to facilitate the commoditization of black music; of black soul. The million-dollar smile made the potentially threatening Afro “cute”; the pleasantly rigid choreographed moves made the characteristically African rhythms underlying the production more “comfortable”.

Ironically, Hip Hop has mirrored Jackson’s example of black music/soul made “popular” by power structures.  Today, black music has been stripped of its resistance qualities thanks to the control and regulation of the airwaves; resulting in Rap music that is largely offensive to middle-class sensibilities but does not threaten the physical or psychological structure of society. Michael Jackson and his brothers attempted to implant and foster that dynamic in the youth generation of the 1970s. Thanks to Smokey Robinson, Marvin Gaye and Stevie Wonder, it was already alive and well in the older generations of blacks and whites familiar with the Jim Crow south as well as in those blue-collar Americans working in factories in the Midwest and north.

Any Hip Hop-er worth his or her weight in vinyl will note 1979 as the year that the Sugar Hill Gang released their hit single “Rapper’s Delight” off of their self-titled first album. Based on the global success of this record, some historians point to 1979 as the start of rap music; the literal birth of Hip Hop music recording.  But another landmark album dropped that year too:  Off the Wall.

Stylistically, these albums are actually very similar.  Both have a resident ‘70s Disco Lounge-like aesthetic to them, Sugar Hill Gang more humor and bravado; Off The Wall more ballad and sensitivity. Their trajectories, however, could not be more different. The Sugar Hill Gang kicked-off an expansionary period of Rap music recording that has continued to this day. Today, Hip Hop is the basis for a billion dollar global network of industries, a large part of which is credited to the initial success of Wonder Mike, Big Bank Hank and Master Gee (artists most Hip Hop fans under 30 have never even heard of). Off The Wall, on the other hand, catapulted Michael Jackson into the stratosphere as a legitimate stand-alone, commercially viable mega-star sex symbol; occupying an artistic space held by him and him alone for more than four decades.

Thus, Jackson’s next five solo albums parallel the development and evolution of Hip Hop as an industry.  1982 saw Thriller (arguably the single greatest album of all time) juxtaposed with a lesser known but critically important Rap release by Grandmaster Flash and the Furious Five [click to read] (The Message). Bad was released in 1987, the same year Eric B. & Rakim [click to read] dropped Paid In Full. In all three instances (Off The Wall, Thriller, Bad) Jackson contributed an alternative and completely different perspective on black art compared to the early works of Hip Hop’s originators.  In effect, Hip Hop’s near overnight appeal to the masses of black and brown youth in urban centers prevented Jackson’s sensibility from extending itself to the ’80s babies, practically isolating Jackson to an older, milder generation of young adults and professionals.

But purveyors of Hip Hop culture have much to thank Jackson for. Despite an agenda that would pose black music as safe and acceptable to Americans, he pioneered an avenue of creativity never before witnessed on the post-industrial American landscape. Michael Jackson made it cool to grab your genitals, point to the sky, and scream “ja-kak!” in public.  His eccentric fashion sense was not only emulated but worshiped by adoring fans worldwide. Michael Jackson also deserves credit for being among the first (if not the first) music video filmmaker. The 14-minute long music video for “Thriller” was a large-scale production, the likes of which have been replicated and modeled on countless sets since then. His heavy rotation on MTV coupled with a then unprecedented endorsement deal with Pepsi were mere hints at the corporate marketing dollars that future Rap acts would cash in on.

And that’s not even mentioning the dozens of rappers who have sampled or taken from Jackson’s  work.  Some of my more notable favorites include:

Perhaps the most compelling example is 2007’s Rhymefest release Man in The Mirror [click to read], a mixtape tribute to Jackson which featured remixes of original Mike-Jack cuts with cameos by Talib Kweli, Missy Elliot, and Ghostface Killah. Unlike other gratuitous ploys to capitalize on the Michael Jackson brand, this 24-track mixtape highlights vintage Michael Jackson almost more than it does Rhymefest’s lyrical ability, which indicates ‘Fest’s (who marshaled this tribute while Jackson was still alive) extreme fan-hood.

Beneath all of that was a person. A person with a mother and a father. A person with a family. A person who grew up black during the ’60s. A person with a life. Michael Jackson would have almost certainly remembered the lives and deaths of Malcolm X and Martin Luther King. I never heard his version of those stories. In fact, I never heard anything even remotely social from Michael Jackson, unless it was internationally oriented…in which case there were plenty of examples of feed-the-needy-heal-the-world pleas. This is conspicuous and in my opinion it can not be ignored. One of the most universally recognizable black men ever has no position on the plight of Black Americans? No opinion on the “War on Drugs”? (Jackson actually met with President Ronald Reagan at the White House.)  No comment on the exploding prison industrial system or the new virus killing disproportionate numbers of black men? Somehow, Michael Jackson was able to live through a hell of a lot of black history while singing and dancing all over the world and never say anything of political or cultural substance. If this seems unremarkable consider this: Michael Jackson was born just four years after Mumia Abu Jamal. That means they could have gone to high school together.

Unlike Mumia, the legend of Michael Jackson will undoubtedly be an individual tale; one that focuses on the mysterious and troubling man, and omits those conditions that helped produce his unique pattern of bizarre behavior.  Indeed, for those who won’t have memories of his life or where they were when they heard of his death, this is Hip Hop’s responsibility: to remind and challenge us to examine the environmental conditions that created the artistic brilliance, genius, and philanthropic generosity that this world lost on June 25th 2009.